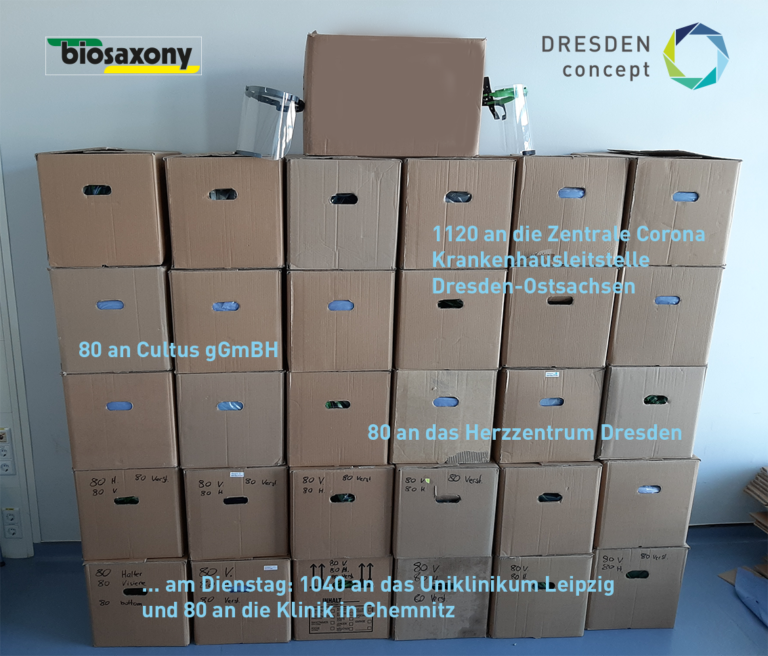 Private nursing services, the professional fire brigade, and other public institutions are currently struggling with the same problems as hospitals: Protective equipment is scarce, and the procurement of such equipment is extremely challenging due to supply bottlenecks. The DRESDEN-concept partners decided to help and handed over more than 3000 plastic visors produced by 3D-printing and injection moulding.

The project team of DRESDEN-concept researchers and the biosaxony network were able to supply various facilities with plastic visors in a very short time, thanks to 3D printing and injection moulding elements. The process development, normally taking up to half a year, was accelerated by the researchers working around the clock. With the assistance of the 1st Mould company from Pirna, TU Dresden’s Institute for Lightweight Engineering and Polymer Technology (ILK), and Kunststoffschmiede e.V., head mountings for the plastic visors could be produced on a large scale by injection moulding with short preparation time. The Fraunhofer Institute for Material and Beam Technology (IWS) produced visors by laser cutting. As a result, the 3D printers of the research institutions only had to produce support strips, allowing the researchers to focus on optimisation and quality control.

‘Due to injection moulding, we were able to reduce the production time of the head mountings from 1.5 hours to 15 seconds. To produce the head mountings, we use production residues, which makes the process very resource-efficient. We are working hard on a solution to produce also the other parts of the plastic visor by recycling injection moulding’, states Felix Schulz, core team member in the Kunststoffschmiede and research associate at the ILK.

As DRESDEN-concept and biosaxony were also approached by institutions that do not receive supplies from the hospital control centres, the partners decided to produce part of the plastic visors for those institutions as well. The plastic visors are used e.g. by Dresden’s professional fire brigade, Cultus gGmbH Dresden, nursing homes in Zwickau, physicians’ practices in Torgau, and numerous other Saxon institutions.

‘The fire and disaster protection office of the State capital of Dresden is grateful for the support it has been receiving during these weeks. The protective visors provided to us are an important element in our daily emergency services. These protective visors offer effective protection against possible infections, especially during the preclinical intubation of patients requiring ventilation, during the suction of secretions, and also when taking nasal, oral and throat swabs’, says Michael Klahre, press spokesman of the Dresden Fire Department.

Additionally, in response to an appeal to the research alliance partners, dispensable reserves of disinfectants and protective equipment could be distributed e.g. to the Dresden Children and Youth Service.

Requests for visors can be addressed to Romy Conrad, coordinator of the head office of DRESDEN-concept e.V. (geschaeftsstelle@dresden-concept.de) and to André Hofmann, CEO biosaxony (hofmann@biosaxony.com).

Biosaxony is the association for biotechnology and medical technology in Saxony. Its members include businesses, research institutions, as well as stakeholders and suppliers of the industry. Its tasks include initiating projects between industry and science, providing services and expertise, and presenting regional knowledge in order to support the valuable development of these cross-sectional technologies, thereby strengthening Saxony as an economic region.

Coordinator of the Head Office of
DRESDEN-concept e.V.