The SAN II focused on the interaction between medical and technical knowledge, in particular new (minimally invasive) surgical procedures and therapies and the use of new materials in (intelligent) implants and instruments, as well as engineering contributions to medical research.

Working Groups have organized themselves as follows:

On November 30, 2017, the first follow-up meeting of the Scientific Area Network (SAN) “Innovations in Medical Technology” took place at the University Hospital Carl Gustav Carus Dresden. With the support of the Interaction Team of the TU Dresden, the scientists investigated the question “How can cooperation with physicians in the DRESDEN concept succeed?

In subsequent cooperation talks, the scientists discussed the panels of the SAN “Implants, Surgery, Imaging/Diagnosis”. These topics were by far not discussed at the end, so that further meetings will follow in the coming year.

Among the participants were professors and young scientists from the DRESDEN-concept partners, such as from the University Hospital, the Leibniz IPF, the Fraunhofer IWS/IKTS/FEP and the TU Dresden.

The kick-off event of the Scientific Area Network (SAN) „Innovations in Medical Technology“ was held in the Dresden State Art Collections on Monday 23 October 2017 with approx. 150 (junior) researchers from DRESDEN-concept partner institutes in attendance. Each of the 22 speakers held a five-minute presentation about their research priorities and these functioned as catalysts for subsequent discussions with other scientists. Implants made out of regenerative materials, innovative surgical instruments and intelligent microsystems for healing illnesses: these were just a few of the event’s topics. After reflecting on the kick-off event, small groups will be formed from which research projects can emerge.

This is the programme of the Kick-Off Event: 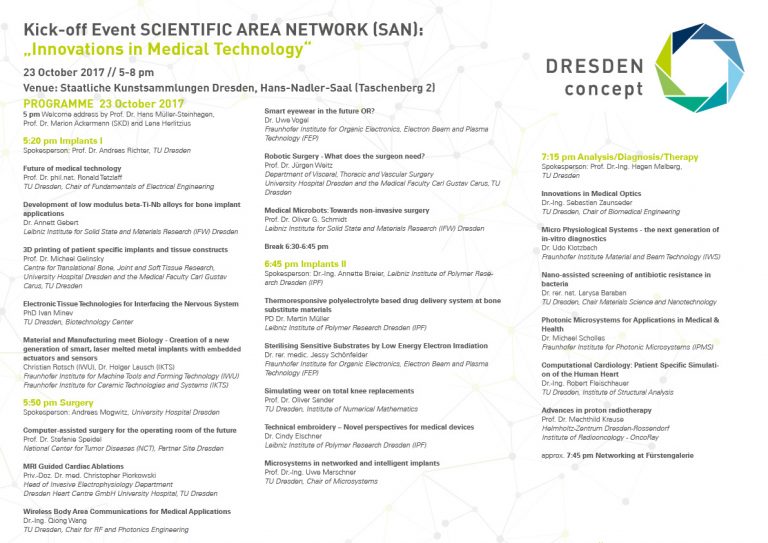